Despite the emergence of many soft-bodied robotic systems, model-based feedback control for soft robots has remained an open challenge. This is largely due to the intrinsic difficulties in designing controllers for systems with infinite dimensions. We develop multiple control methods using either minimal parameter models or model-order reduced finite element methods. The validation of our controllers happens on self-built multi-segment soft robotic arms that are actuated through pneumatics. 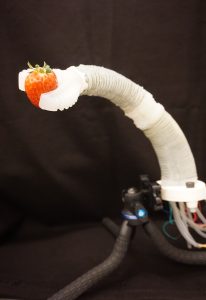 Due to their inherent compliance, soft robots are more versatile than rigid linked robots when they interact with their environment, such as object manipulation or biomimetic motion, and are considered to be the key element in introducing robots to everyday environments. Although various soft robotic actuators exist, past research has focused primarily on designing and analyzing single components. Limited effort has been made to combine each component to create an overall capable, integrated soft robot. Ideally, the behavior of such a robot can be accurately modeled, and its motion within an environment uses its proprioception, without requiring external sensors. This work presents a design and modeling process for a Soft continuum Proprioceptive Arm (SoPrA) actuated by pneumatics. The integrated design is suitable for an analytical model due to its internal capacitive flex sensor for proprioceptive measurements and its fiber-reinforced fluidic elastomer actuators. The proposed analytical dynamical model accounts for the inertial effects of the actuator’s mass and the material properties, and predicts in real-time the soft robot’s behavior. Our estimation method integrates the analytical model with proprioceptive sensors to calculate external forces, all without relying on an external motion capture system. SoPrA is validated in a series of experiments demonstrating the model’s and sensor’s accuracy in estimation. SoPrA will enable soft arm manipulation including force sensing while operating in obstructed environments that disallows exteroceptive measurements.

This work presents a computationally efficient method to model and simulate soft robots. Finite element methods enable us to simulate and control soft robots, but require us to work with a large dimensional system. This limits their use in real-time simulation and makes those methods less suitable for control design tools. Using model order reduction, it is possible to create a reduced order system for building controllers and observers. Model reduction errors are taken into account in the design of the low-order feedback, and it is then applied to the large dimensional, unreduced model. The control architecture is based on a linearized model of the robot and enables the control of the robot around this equilibrium point. To show the performance of this control method, pose-to-pose and trajectory tracking experiments are conducted on a pneumatically actuated soft arm. The soft arm has 12 independent interior cavities that can be pressurized and cause the arm to move in three dimensions. The arm is made of a rubber material and is casted through a lost-wax fabrication technique.

This work extends our previously proposed formulation for the dynamics of a soft robot from two to three dimensions. The formulation connects the soft robot’s dynamic behavior to a rigid-bodied robot with parallel elastic actuation. The matching between the two systems is exact under the hypothesis of Piecewise Constant Curvature. Based on this connection, we introduce a control architecture with the aim of achieving accurate curvature and bending control. This controller accounts for the natural softness of the system moving in three dimensions, and for the dynamic forces acting on the system. The controller is validated in a realistic simulation, together with a kinematic inversion algorithm. The paper also introduces a soft robot capable of three-dimensional motion, that we use to experimentally validate our control strategy.

Dynamic control of planar soft robots interacting with the environment

We propose an alternative formulation of the soft robot dynamics which connects the robot’s behavior with the one of a rigid bodied robot with elasticity in the joints. The matching between the two system is exact under the common hypothesis of Piecewise Constant Curvature. Based on this connection we introduce two control architectures, with the aim of achieving accurate curvature control and Cartesian regulation of the robot’s impedance, respectively. The curvature controller accounts for the natural softness of the system, while the Cartesian controller adapts the impedance of the end effector for interactions with an unstructured environment. This work proposes the first closed loop dynamic controller for a continuous soft robot. The controllers are validated and evaluated on a physical soft robot capable of planar manipulation.

This work presents the development of an autonomous motion planning algorithm for a soft planar grasping manipulator capable of grasp-and-place operations by encapsulation with uncertainty in the position and shape of the object. The end effector of the soft manipulator is fabricated in one piece without weakening seams using lost-wax casting instead of the commonly used multi-layer lamination process. The soft manipulation system can grasp randomly positioned objects within its reachable envelope and move them to a desired location without human intervention. The autonomous planning system leverages the compliance and continuum bending of the soft grasping manipulator to achieve repeatable grasps in the presence of uncertainty. A suite of experiments is presented that demonstrates the system’s capabilities.

Soft continuum manipulators have the advantage of being more compliant and having more degrees of freedom than rigid redundant manipulators. This attribute should allow soft manipulators to autonomously execute highly dexterous tasks. However, current approaches to motion planning, inverse kinematics, and even design limit the capacity of soft manipulators to take full advantage of their inherent compliance. We provide a computational approach to whole arm planning for a soft planar manipulator that advances the arm’s end effector pose in task space while simultaneously considering the arm’s entire envelope in proximity to a confined environment. The algorithm solves a series of constrained optimization problems to determine locally optimal inverse kinematics. Due to inherent limitations in modeling the kinematics of a highly compliant soft robot and the local optimality of the planner’s solutions, we also rely on the increased softness of our newly designed manipulator to accomplish the whole arm task, namely the arm’s ability to harmlessly collide with the environment. We detail the design and fabrication of the new modular manipulator as well as the planner’s central algorithm. We experimentally validate our approach by showing that the robotic system is capable of autonomously advancing the soft arm through a pipe-like environment in order to reach distinct goal states.